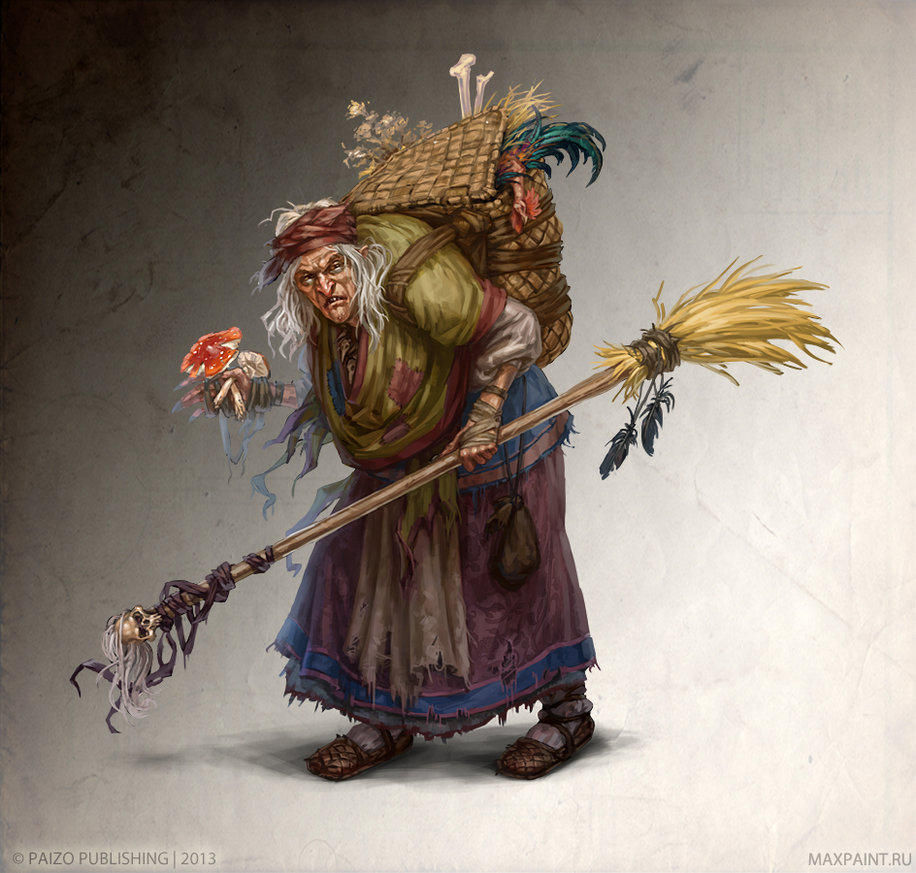 When Baba Yaga first came to Golarion, she arrived in Iobaria and hid her Dancing Hut in the dense forests of the country. Initially, she conversed only with fey and, occasionally, centaurs. Rumours of a powerful arcanist spread in those early days and, eventually, an Iobarian warlord called Kostchtchie visited Baba Yaga full of demands to be made immortal. As punishment for his rudeness and affront, Baba Yaga not only granted him immortality but twisted that fate such that Kostchtchie was transformed into a deformed giant. she also removed a portion of his soul and hid it in a powerful artefact: the Torc of Kostchtchie. After his defeat and humiliation, the warlord fled Iobaria to the Abyss, where he eventually became a powerful demon lord, but has never forgotten his ire for Baba Yaga.


Soon thereafter, Baba Yaga turned her attention to the construction of Artrosa in the Deeprun Crevasse: a huge monument representing a triple aspect of Baba Yaga’s personality. Once completed, Baba Yaga left Golarion for a long while, with but a few revisits to quickly check her minions, only returning more permanently in 3313 AR.

The winter of 3312 AR was terribly bitter, even by the incredibly harsh standards of northern Avistan: warriors who left their swords outside overnight would find that the cold had shattered them by the next morning. As if the cold wasn’t strange enough, the northern lights were so bright and sustained that they were mistaken for daylight. These events would later be seen as omens of the terror that was to come.


The following year the witch-queen Baba Yaga invaded the Linnorm Kingdom of Raemerrund and the Djurstor Confederacy from over the Winterwall Glacier, bringing with her an army of ice trolls, cold fey, frost giant, white dragons, and other evil creatures. King Jarguut and the thanes of the Confederacy were too divided and weakened to offer any serious resistance, and the Winter War ended in the defeat of the Ulfen forces in only 23 days.

Once the Ulfen armies had been defeated, Baba Yaga installed her eldest daughter Jadwiga as queen of the new nation of Irrisen, and divided it into five provinces: Bleakmarch, Feyfrost, Hoarwood, Thronehold, and Wintercrux. After this was accomplished, however, the Witch Queen seemed to lose interest in Irrisen, and departed Golarion abruptly.


Return of the Witch Queen

After founding Irrisen, Baba Yaga was not heard from for nearly a century. In 3412 AR, the Three Riders of Baba Yaga appeared in Irrisen. These strange, fey horsemen road about the countryside, punishing those who had been unfaithful to the Witch Queen, and (rarely) rewarding those who had stayed true to her, but offered little justification for any of their actions. The following year, Baba Yaga herself returned to Golarion and removed the Queen from the throne, placing her younger daughter Morgannan in charge. She left again shortly thereafter, taking along her eldest daughter Jadwiga along with the first generation of her descendants. This process has reoccurred every 100 years like clockwork, until now….